“The Yates family is desperate because of an old curse which lies heavily upon them. Only the best visionary will be able to find the roots of the curse and helps the family by breaking the curse.”

Neobite Games launched Visions on Kickstarter today, hoping to raise €9000 to bring the set collection/resource management game to life. I received a prototype copy of the game, along with a neoprene mat from the game’s Deluxe version, to give it a shot and see how well it plays. The game has a Victorian-era feel and has the players taking on the role of Mediums trying to break the curse of the Yates family by reconnecting with deceased family members from the family’s past. The game has a well thought out art direction, with additional attention placed in making the game accessible to those who are colorblind.

When you first open the rulebook, Visions sounds more complicated than it really is. It’s one of those games you just need to jump in and try playing for it to click. Once it does you’ll be shaking your head wondering why it took so many words to explain how to play the game.

At its core, it’s a race to see who can obtain the most Mental Influence (victory points) once the game has come to an end. The endgame is triggered when one player reaches 40 Mental Influence. This is done by connecting Family Cards to the center of the board using Time Cards. Time Cards are basically connecting cards that have different 90-degree angles on them. Each Family Card has a required number of Time Cards that need to be piled up before the connection to the center is made valid. 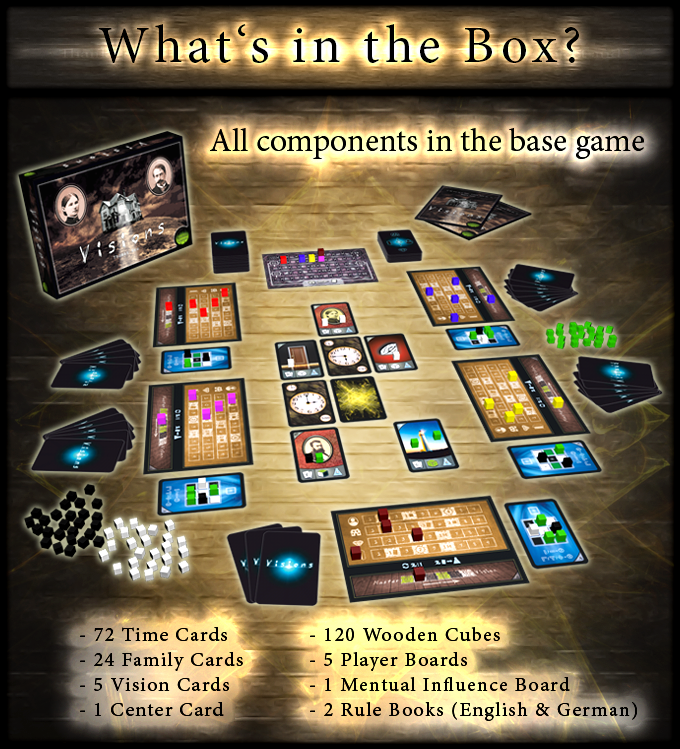 Be the player to complete the connection to earn Vision Stones and move your marker along different tracks on the player board towards Visionary Energy. Vision Stones are placed on a card given out randomly at the beginning of the game to each player, or on the player’s Master Vision board. Fill certain patterns on the card for Mental Energy bonuses. Work your way up the Master Vision track for more Mental Influence. Visionary Energy, on the other hand, can be spent to receive other bonuses, like reducing card costs.

Once you get into the game it all falls into place and is a good time. Gameplay is a bit long for this style of game, with 2-player games coming in around an hour and the time to play going up from there. It’s enjoyable but sometimes feels like it’s dragging on a bit too long.

There’s also an advanced set of the rules that adds a Seer board, an expansion available with the Deluxe version of the game that adds Prediction cards, and solo rules. You can get more info about them in the full rules.

Overall Visions was a good time, once you get past the rules and actually get into the game. The Time Card mechanic is what really brings the game together, though it’s also what makes the game draw on a bit too long. You must keep in mind that what I’ve taken a look at is a prototype, and things can be changed before the game actually comes out if funded.

I’d keep my eye on Visions. It’s an interesting game that has the potential to be pretty good with a bit of polish.

Media personality Rob Kalajian has been a staple in the board game world for many years. As a former writer for Purple Pawn and the owner of A Pawn’s Perspective, Rob focuses on board game reviews, events, and news. A self-proclaimed geek, Rob loves all things toys and games and even helps raise his four kids in his spare time.

Buy me a Tea

Media personality Rob Kalajian has been a staple in the board game world for many years. As a former writer for Purple Pawn and the owner of A Pawn's Perspective, Rob focuses on board game reviews, events, and news. A self-proclaimed geek, Rob loves all things toys and games and even helps raise his four kids in his spare time.

Buy me a Tea