“The world of Verces is a tidally locked planet, one hemisphere always facing the sun as it makes its orbit. As such, half of the planet is baked by constant heat, while the other half is a frozen wasteland. However, a strip of habitable terrain circles the planet where the two sides meet, a temperate zone in a state of constant twilight. Most of Verces’s sentient life evolved in this area, which eventually became known as the Ring of Nations, a unified coalition of countries.

In Starfinder Adventure Path #11: The Penumbra Protocol, the heroes travel to Cuvacara, the capital of Vimal, one of the larger nations on Verces. Known as the “Dusk Jewel,” Cuvacara is a bustling metropolis that is home to the Assembly of Nations, where the Ring of Nations’ government council meets to make policies. Thousands of cybernetics and computer corporations own offices and factories in Cuvacara, and the heroes must investigate one of these companies to learn more about the creepy incidents that befell them on the asteroid resort New Elysium in the previous adventure. But, of course, not everything is what it seems to be, especially in a city like Cuvacara, where every shadowy alleyway has the potential to hide a deadly secret.

Both “The Penumbra Protocol” adventure and the accompanying Cuvacara gazetteer were written by Jenny Jarzabski, turning from the warm glow of the sun in the Starfinder Society scenario “The Solar Sortie” to these neon-drenched streets. (Hmmm, I guess we like giving Jenny alliteratively titled adventures…) Jenny introduces us to a wide variety of Cuvacaran citizens, but rather than describe them and spoil all the surprises, I thought we would show off this incredible map of the Dusk Jewel. Those gray lines represent the city’s mass transit system: elevated bullet trains that can transport passengers around Cuvacara in a matter of minutes. 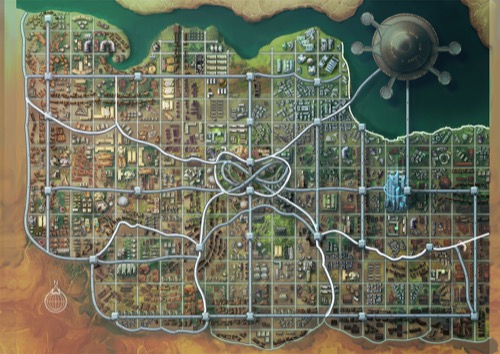 The citizens of Verces are known to embrace cybernetic augmentations and Cuvacara is no exception. In fact, the city is on the cutting edge of these enhancements and experimental cybernetics are often available in the Dusk Jewel before they hit the wider marketplaces. A handful of new Vercite augmentations are presented in this volume, including these bionic knees, which I would definitely purchase in real life as I get older.

Complex actuators and servos are installed in your knees, giving you the power to make impressive leaps. You always count as having a running start when attempting Athletics checks to jump. In addition, you don’t fall prone if you fail an Athletics check to jump by 5 or more. Finally, the damage you take from the first 10 feet of a fall is converted into nonlethal damage, even if you aren’t falling onto a yielding surface.

Finally, in addition to some creepy new monsters by Jenny Jarzabsi and James L. Sutter and a glimpse of planet ravaged by Hellfire by Owen K.C. Stephens, this volume presents a detailed look at the shadowy fiends known as velstracs by Isabelle Lee. These twisted outsiders have unsurprisingly embraced the modern technology of the Material Plane, some of them integrating such equipment into their own forms as they seek an undefined perfection of body and mind. With some gruesome magitech augmentations and painful weapon fusions, this article certainly isn’t for the faint of heart!

That’s all I can really reveal without spoiling too much about the Signal of Screams Adventure Path, but hopefully this tantalizing preview will get you exciting to enjoy the scares and thrills of The Penumbra Protocol!”